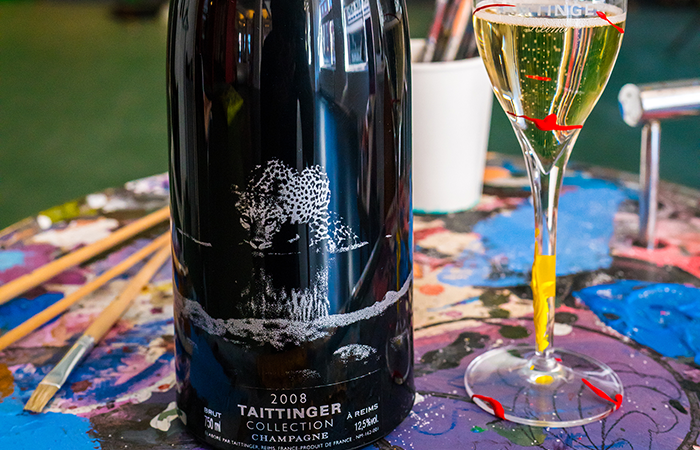 Champagne Taittinger has revealed the 14th edition of its prized Taittinger Collection.  The renowned Brazilian photographer, Sebastião Salgado, has created the latest limited edition bottle for the 2008 vintage – the first Brazilian artist to do so and also the first time for a photographic artist.

For Salgado, life and art are inseparable. He is passionate about the state of the planet and his photographs clearly convey his deep interest for the human and animal species on earth.  He has travelled the world documenting the human and environmental tragedies, as well as the grandeur of nature in analogue black and white photographs.

Salgado chose an image with a powerful message for the design of his bottle: A leopard in the Barab River Valley, Damaraland, Namibia which he took on his travels in October / November 2005.  It is a statement of what is most universal and original – an animal drinking at a spring: Life, simple and peaceful.  In line with Salgado’s black and white photography, the bottle has been designed in black with white writing.

Taittinger Brut Millésimé 2008 is blended from first press wines only and consists of 50% Chardonnay and 50% Pinot Noir grapes harvested mostly from the Grand Crus in Montagne de Reims and the borders of the Vallée de la Marne.  The Champagne is made in limited quantities and only in exceptional vintages.

The Taittinger Collection was the brainchild of Claude Taittinger, a great patron of the arts, who in 1983 approached his first artist, Hungarian Victor Vasarely, with a view to commission him to make a distinctive look for a small number of 1978 vintage bottles. Subsequent editions have featured the work of world famous artists such as the French surrealist André Masson and American pop artist Robert Rauschenberg amongst others.  The rest, as they say, is history.

Lynn Murray, Marketing Director at Hatch Mansfield, Champagne Taittinger’s sole UK agent comments, ‘The Taittinger Collection is another demonstration of the great passion the Taittinger family has for the arts and the natural synergy that they perceive between the creation of the artist and the art of the winemaker. There is always a great deal of anticipation around the release of the new Collection wine and it enjoys a huge following amongst collectors. We are very excited about the latest Taittinger Collection release and the link to photographic art and it was most fitting to launch this beautiful piece at the Paris natural history museum in the presence of the artist. Salgado’s is highly regarded, as is the 2008 vintage generally – a powerful combination.’